The video shows the Donetskstal open hearth shop a few days before it was closed down for good in April 2012. 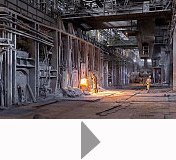 Donetskstal was founded in 1870 by the Welsh engineer John Hughes.
Most installations were imported from England and iron production in one blast furnace started in 1872.
By 1910 the plant had 6 blast furnaces, 9 open-hearth furnaces, 2 Bessemer converters, blooming, rail, structural, sheet, and some section rolling mills and a a coking plant.
From 1928 to 1961 the mill was named Stalino Iron Works.
In 1953 the 2300mm plate mill was installed which is still in use today.
Blast furnace 1 was built in 1956,NO 2 one year later. Both where completly modernised in 2002 and 2006.
One of the first continuous casters worlwide was built in 1960.
Two blast furnaces and several pig iron casters are actually producing.
More inside views.

6 thoughts on “Donetskstal, the last days of Siemens-Martin”