One of the few things I would really miss without internet are the aerial photos from various sources that can be used nowadays quite conveniently. Since 2009 (Vs. 5) Google Earth Pro offers the possibility to load historical aerial images. Although the quality of the images varies greatly and only recent history is covered, they are often very helpful. So I recently went on a flight over Shanxi, China’s largest coalfield. Shanxi, not to be confused with the adjoining Shaanxi province to the west, is about twice the size of Bavaria. Coal mining takes place in practically all parts of the province. From large open pits in the northwest to countless drift mines and deep mines.Despite the Corona winter I quickly buried the plan to mark all the mines I saw, because there are too many, and anyway it’s only mining, not my core business. So I focussed on coking plants. Shanxi is Chinas largest coke producer so I thought there must be some.
I found 260 on the aerial photos taken between 2008 and 2013 (there were s 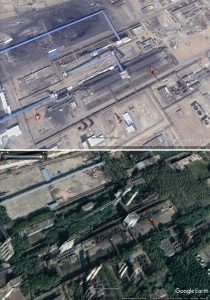 till five coking plants in Germany in 2008), and these are only the larger plants, the traditional beehive ovens, which must have still existed at that time, despite the ban, are barely visible on aerial photos.

That China has made enormous efforts in the last 10 years to get its environmental problems under control which is evident from the fact that 146 of the approximately 260 coking plants that were still visible in Shanxi in 2008 have by now been shut down. With it’s remaining 114 plants (and I’m sure I’ve overlooked a few), Shanxi produces 20 % of China’s coke (2019), which in turn accounts for 60 % of the world’s production.
As in many communist economies, the core aggregates of the heavy industry are often standardized in China.
Very typical, for example, are stamp charged coking plants (relatively easy to recognize by the coal tower standing next 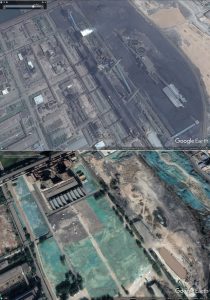 to the batteries) with two batteries and 4.3 meter furnaces. In these plants, even low-grade coals can be processed into usable blast furnace coke by precompression.
But there are ultra modern facilities too like the one in Xiangfen (65).  The only coke plant I have ever seen with dust removal sheds on both the coke and pusher sides of the batteries
About half of the coking plants in Shanxi were top loaders (and apparently there were also combined plants) of older or newer design. 25 plants used non recovery ovens in which no by-products are produced.
Very few Chinese coking plants are attached to coal mines (as was common in Germany), some are operated by the larger steel mills, but by far the majority are stand-alone operations.
What is really remarkable is the fact that most of the coking plants do not have a rail connection. The entire supply and disposal of coal, coke and by-products at these plants is

If you are interested you can download the KMZ file for Google Earth with the coking plant locations in Shanxi here: Shanxi Coking Plants.KMZ
In case this program is not familiar: You can import the KMZ file directly (under File), the historical aerial photos can then be found under the 7th icon from the left in the menu bar (clock symbol).
Decommissioned coking plants have a red icon. Sometimes it was not quite clear whether the plant was already closed down, but if the pusher cars hadn’t changed position for years and the coal yard was empty I assumed that the place was dead.
Since most of the plants in Shanxi disappear quickly after they are shut down, the region is not very productive for the Urbex scene (is there one in China ?).However, some plants seem to be preserved (e.g. 212,211,128,136,194,235). Two stand apparently unfinished as malinvestments (251,252).
If you find any other coking plants please let me  know, but beware those aerials can be a bit addictive.